Blog
Click here for our WEB Special!
Find Us 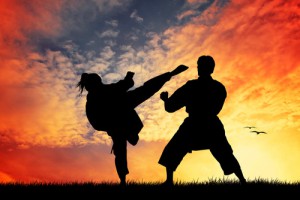 THE RISE OF KARATE

The public exposure to karate is often limited to movies like The Karate Kid or Kung Fu Panda. You may know a bit more if you know someone that does karate or if you do karate yourself. Karate is one of the most popular forms of martial arts. You can find martial arts studios in Alpharetta that teach individuals of all ages about the benefits of karate. What you may not know is where exactly karate comes from and how it became to be such a popular form of martial arts in America. At Karate Atlanta, we love and appreciate the exciting history of karate that has made it what it is today.

To begin, we first must know what the term “martial arts” means. Martial arts are codified systems and traditions of combat practices. They are practiced for many purposes including physical health and fitness, self-defense, competition, and entertainment. They are also practiced to develop yourself physically, mentally, and spiritually.Karate was developed from the indigenous martial arts on the Ryukyu Islands in what is now Okinawa, Japan, with some influence from Chinese martial arts. The practice of karate was brought to mainland Japan in the early 20th century during a period of cultural exchanges between China and Japan. Restrictions on weaponry also increased its popularity. Gichin Funakoshi is typically given credit for both introducing and popularizing karate on the mainland of Japan. He sought to modernize the practice of karate. Jigoro Kano, the founder of judo, developed the standard use of the white uniform and colored belts.

As the century progressed, karate demonstrations were given and universities began sponsoring karate clubs. This period of time saw increasing Japanese militarism, which only fueled the popularity of karate. Following World War II, Okinawa became an important military point. Karate soon became popular among the United States servicemen stationed in Okinawa. The popularity of karate increased dramatically in America with the release of martial arts movies from Hollywood in the 60s and 70s.

Today, karate is mostly a striking art that incorporates kicking, punching, and open-hand techniques like spear hands and palm-heel strikes. Some modern styles of karate also include throws, grappling, joint locks, restraints, and more. In 2009, the International Olympic Committee voted not to have it included as an Olympic sport, but that could change in coming years. Karate remains a popular form of martial arts that many children and adults enjoy. You can find studios that offer karate in Atlanta to learn more about the great benefits that karate offers.